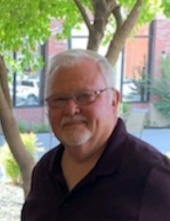 He was born September 10, 1942, in St. Louis, Missouri, the son of the late Chester and Launa (Juergens) Lewis.

Winiford was a 1960 graduate of Vienna High School.

He was united in marriage on July 25, 1964, in Freeburg, Missouri to Doris Helen Pope who survives at the home.

Private family Mass of Christian Burial will be 11 a.m. Friday at St. Francis Xavier Catholic Church with the Rev. Michael Penn officiating. Military honors will follow the Mass. The service will be live-streamed for those who wish to watch remotely. The link can be found on Winiford’s obituary page under Tribute Wall at www.dulletrimble.com.

In lieu of flowers, memorials are suggested to the Samaritan Center or the American Diabetes Association.

Those wishing to send condolences to the family may do so at the www.dulletrimble.com website.
To send flowers to the family in memory of Winiford Jerome Lewis, please visit our flower store.