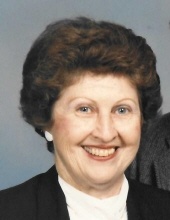 She was born November 14, 1929, in Cooper Hill, Missouri, the daughter of the late Emory Edwin and Dicie Ann (Harness) Pointer.

She was united in marriage on September 24, 1949, at St. Peter Catholic Church in Jefferson City to Edward Henry Wekenborg who preceded her in death on May 17, 2001.

Wilma was the co-owner and secretary of Midwest Implement Company. She was a member of Immaculate Conception Catholic Church, the Salve Mater chapter of the Immaculata Club, Mother Seton Widow’s Group, and was a volunteer at the Samaritan Center.

Memorials are suggested to Immaculate Conception Catholic Church or to Hospice Compassus.

Those wishing to send condolences to the family may do so at the www.dulletrimble.com website.
To send flowers to the family in memory of Wilma Dean Wekenborg, please visit our flower store.