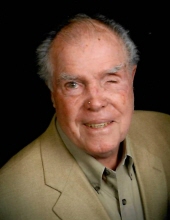 He attended Redemptorist High School and Isaac Delgado Central Trade School in New Orleans where he studied engineering and design.

Bill enlisted in the Merchant Marines on his eighteenth birthday and served for one year. In December of 1950, he entered the United States Army, serving in the combat zone during the Korean Conflict.

He was united in marriage on September 24, 1953, at the Holy Family Catholic Church in Freeburg to Margaret J. “Marge” Neuner who survives at the home. Bill and Marge selected this special day as it was her parents 40th wedding anniversary.

Bill began his professional career with Pothorst Company in New Orleans, moving to Bollinger Shipyard, then to AP & EW Dupont Company in Morgan City, Louisiana where he designed sea going tugboats. He was most proud when he designed a beautiful boat for a large Aquarium. In 1959, they moved to Missouri, and he began working at DeLong’s Inc. doing drafting and design. He continued his career at Verslues & Associates and retired from J. C. Industries in 1990 where he bid large highway and building construction jobs.

He was a member of Immaculate Conception Catholic Church, the Veterans of Foreign Wars, and was a 50-year member of the American Legion Post 5.

Bill loved to golf and was an incredibly talented woodworker and craftsman. He designed, restored, and built furniture for friends and family. He was a great cook with oyster stuffing and potato salad being his specialties.

He was preceded in death by his parents, and siblings, Margaret (Bob) Dawson, Bess (Vic) Cerise, Warren (Sarita) Bose, and A. J. Bose.

Memorials are suggested to Hospice Compassus or to the Helias Foundation.

Those wishing to email tributes or condolences to the family may do so at the www.dulletrimble.com website.
To send flowers to the family in memory of William Joseph "Bill" Bose, Jr., please visit our flower store.