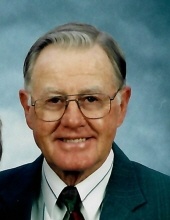 He was born November 25, 1929, in Taos, Missouri, the son of the late William S. and Walburga (Borgmeyer) Thessen.

He was a 1948 graduate of St. Francis Xavier High School. Following high school, he served in the United States Navy.

He was united in marriage on May 3, 1952, at St. Peter Catholic Church in Jefferson City to Joann Catherine Iven who preceded him in death on August 19, 2017.

Bill was a life-long farmer of the Thessen Century Farm. He also worked for Farm Bureau and Von Hoffman Press.

He was a member of St. Francis Xavier Catholic Church in Taos where he served as an usher, the Knights of Columbus in Taos, Osage River Flood Control Association, 4-H Leader, and various farm and cattle organizations.

Bill was an avid pitch and pinochle player and enjoyed a good highball. He liked to waltz and listen to old-time country and big band music. He was also a St. Louis Cardinals fan.

He was preceded in death by his parents; an infant sister and brother, one brother, Walter Thessen; brother-in-law, Alvin Kliethermes; brother-in-law and sister-in-law, Robert and Judy Iven; and two nieces, Kelly Thessen and Terri Iven.

Visitation will be 4-7 p.m. Tuesday, November 30, 2021, at Dulle-Trimble Funeral Home in Jefferson City with a prayer service at 3:30 p.m. Additional visitation will be 9-9:45 a.m. Wednesday at St. Francis Xavier Catholic Church in Taos.

Mass of Christian Burial will be 10 a.m. Wednesday at St. Francis Xavier Catholic Church with the Rev. Michael Penn officiating.

In lieu of flowers, memorials are suggested to St. Francis Xavier Catholic Church.

Those wishing to email tributes or condolences to the family may do so at the www.dulletrimble.com website.
To send flowers to the family in memory of William John Thessen, please visit our flower store.