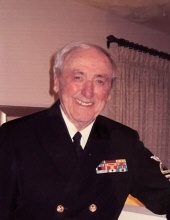 Bill was a graduate of East Alton-Wood River Community High School in 1938.

Following graduation, Bill enlisted in the United States Navy on October 24, 1938, in St. Louis. Bill was assigned to the USS Solace (military hospital ship) as an X-Ray Technician stationed at Pearl Harbor during the attack on December 7, 1941. Bill served throughout World War II and the Korean War on hospital ships at various battle campaigns. He was discharged from San Diego, California as a Hospital Corpsman – Chief on May 5, 1958.

He was united in marriage on April 10, 1971, in North Kansas City, Missouri to Linda Eileen Herron who survives at the home.

He was a member of the Cathedral of St. Joseph, the Marine Corps League – Central Missouri Detachment, and the Pearl Harbor Survivors Association.

He was preceded in death by his parents; and his sister, Ethel Mae Lawliss.

In lieu of flowers, memorials are suggested to the Marine Corps League – Central Missouri Detachment; or to a charity of the donor’s choice.

To send flowers to the family in memory of William Eugene McAnany, Jr., please visit our flower store.