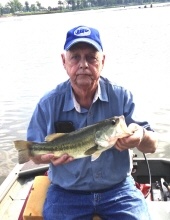 Butch served his country in the United States Navy.

He was united in marriage on May 9, 1969, in Pine Bluff, Arkansas to Mary Virginia “Jenny” Rodgers who survives at the home.

Butch worked for over 40 years as a conductor with Cotton Belt Railways in Arkansas and Union Pacific Railways in Missouri.

He enjoyed fishing and hunting and participated with Union activities with the railroad.

He was preceded in death by his parents, and a brother, Larry Morrison.

Memorials are suggested to the American Heart Association or to St. Jude Children’s Research Hospital.

Those wishing to send condolences to the family may do so at the www.dulletrimble.com website.
To send flowers to the family in memory of William Edward "Butch" Morrison, please visit our flower store.