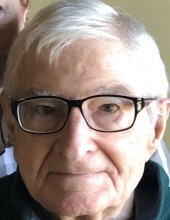 He was born May 23, 1934, in Shelby, North Carolina, the son of the late William Burrus Wright, Sr. and Flavia Newton Wright.

William was a 1953 graduate of Biltmore High School, a 1957 graduate of Mars Hill College, and a 1960 graduate of North Carolina State University.

He served his country in the United States Air Force.

William worked as a chemical engineer for 43 years before retiring in 1996.

He was a member of the American Legion, enjoyed fishing and golfing, listening to Jazz, and spending time with his family.

He was preceded in death by his parents; his wife, Freida Wright; and two brothers, Jerry and Douglas Wright.

Those wishing to email tributes or condolences to the family may do so at the www.dulletrimble.com website.
To send flowers to the family in memory of William Burrus Wright, Jr., please visit our flower store.