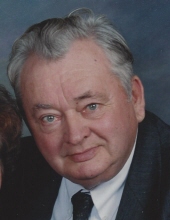 He was born June 25, 1934, in Jefferson City, the son of the late Joseph Bernard and Joanna Anna “Jennie” (Toebben) Schaefer.

He was united in marriage on April 14, 1956, at St. Martin Catholic Church in St. Martins to Ruth Jane Benne who survives at the home.

In earlier years, Walter worked for Tweedie Shoe Factory and spent most of his career at the Missouri Department of Corrections as a correction officer. He also farmed most of his life.

He loved to stay busy outside doing work in his garden, woodworking and cutting wood. He really enjoyed antiques and going to auctions.

Mass of Christian Burial will be 10 a.m. Thursday, at St. Francis Xavier Catholic Church in Taos with the Rev. Michael W. Penn officiating.

Those wishing to send condolences to the family may do so at the www.dulletrimble.com website.
To send flowers to the family in memory of Walter Henry Schaefer, please visit our flower store.