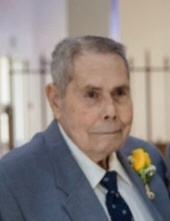 Wallace Lee Matthews, 84, of Okeechobee, Florida, passed away October 14, 2020, in North Carolina as a result of a motor vehicle accident.

Wallace served in the United States Navy retiring as a Chief Petty Officer. He was a member of the Veterans of Foreign Wars, the American Legion, and the Fraternal Order of Eagle’s.

He was preceded in death by his parents; his first wife, Jouellorene Janice Duncan; and his second wife, Wilma Lanyon.

Graveside service with military honors will be 2 p.m. Monday, October 19, 2020, at Centertown Cemetery in Centertown, Missouri.

Those wishing to email tributes or condolences to the family may do so at the www.dulletrimble.com website.
To send flowers to the family in memory of Wallace Lee Matthews, please visit our flower store.