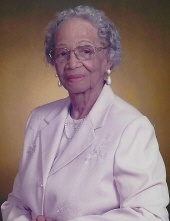 She was born June 30, 1921, in Cleveland, Ohio to the late James Henry Dotson Sr. and Rebecca Johnnie (Trevillion) Dotson.

Mrs. Jones was a 1939 graduate of Booker T. Washington High School in Tulsa Oklahoma and received her Bachelor of Arts Degree in 1943 from Langston University in Langston, Oklahoma.

From 1969 to 1989, she worked at Lincoln University as the Executive Assistant to the following presidents: Dr. Walter C. Daniel, Dr. James Frank, Dr. Thomas Miller Jenkins, and Dr. Wendell G. Rayburn, Sr. She retired in 1989. She also worked in the Office Practice Laboratory, Registrar’s Office and the Dean of Students' Office.

She was a very active member of Second Baptist Church in Jefferson City where she served as Church Clerk for over 25 years, member of the Deaconess Board, Women Missionary Union, Sunday School Teacher and Senior Adult Ministry.

She was a life member of Alpha Kappa Alpha Sorority, Inc. and a Diamond Soror (recognized member for 75 years of service in 2016.) She was initiated in Alpha Zeta Chapter at Langston University. She served as Graduate Advisor to Alpha Iota Chapter at Lincoln University from 1963-1983. She also served on the National Sorority Standard Committee and Membership and Selection Committee for Septima Poinsette Clark Award.

Mrs. Jones held numerous positions in her local chapter, Gamma Epsilon Omega. In honor of her outstanding service to Alpha Kappa Alpha Sorority Inc., the Sorority named the Outstanding Graduate Advisor’s Award, which is awarded at the annual Mid-Western Regional Conference. In memory of her outstanding service, a bench will be dedicated in her honor on October 18, 2019 on the campus of Lincoln University by alumnae of Alpha Kappa Alpha Sorority, Inc.

Mrs. Jones worked with local and state PTA’s. She was President of the Washington School PTA when it was disbanded to become part of the State PTA following desegregation. She was a member of the Missouri PTA Board of Directors from 1962-1968 having served as Safety Chairman, Recreation Chairman, Secretary and 7th Vice President.

Locally, she served as member and Secretary of the American Red Cross Board of Directors for Cole County.

The Services will consist of: The Alpha Kappa Alpha Sorority Ceremony, “Ivy Beyond the Wall,” Thursday, September 5, 2019 at 9:30 a.m. at Second Baptist Church in Jefferson City, Missouri.

Burial will be in the Longview Cemetery in Jefferson City, Missouri. Memorials are suggested to Second Baptist Church.

Dulle-Trimble Funeral Home is in charge of the arrangements. Those wishing to email tributes or condolences to the Jones Family may do so at the www.dulletrimble.com website.
To send flowers to the family in memory of Vivian Clarice Dotson Jones, please visit our flower store.