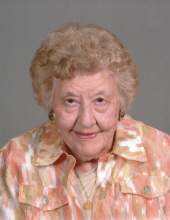 Velma Rose Leary, 96, of Jefferson City, passed away peacefully on Friday, January 14, 2022, at her residence.

She was born July 25, 1925, in Jefferson City, the daughter of Frederick William and Clara (Sailer) Vogel.

Velma was a 1943 graduate of St. Peter Catholic School.

She was united in marriage on April 14, 1951, at St. Peter Catholic Church in Jefferson City to John Patrick “Pat” Leary who preceded her in death on November 17, 1977.

Velma worked as a typist, secretary, and bookkeeper for United Mutual Insurance Company, a company founded by her father, and the Missouri Oil Council.

She was a charter member of the Cathedral of St. Joseph where she participated in the prayer line and the St. Joseph Women’s Association, member and later a Board member of the St. Mary’s Hospital Auxiliary, member of Knights of Columbus Auxiliary, and a charter member of the Meadow Lake Acres Country Club. Velma was a founding member and active participant of the Perpetual Adoration at the Cathedral until failing health. She volunteered with the Meals on Wheels Program and volunteered at the Diocese of Jefferson City Chancery and Catholic Charities.

Visitation will be 9-10 a.m. Wednesday, January 19, 2022, at St. Peter Catholic Church. Mass of Christian Burial will follow at 10 a.m. with the Rev. Louis Nelen officiating. The service will be live streamed for those who wish to watch from home. The link can be found on Velma’s obituary page under Tribute Wall at www.dulletrimble.com.

Memorials are suggested to the Cathedral of St. Joseph Foundation or St. Mary’s Hospital.

Those wishing to send condolences to the family may do so at the www.dulletrimble.com website.
To send flowers to the family in memory of Velma Rose Leary, please visit our flower store.