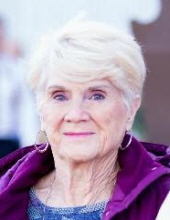 Veda Voncile Courtney-Hunt, 86, was surrounded by loved ones as she peacefully departed her earthly home and was welcomed to her heavenly home on January 22, 2022.

Voncile was born May 6, 1935, in Piedmont, OK to the parents of Chester Edward Courtney and Jimi Ernestine Towe. Voncile graduated from Tahlequah High School and went on to graduate from Northeastern State University in Tahlequah, OK. She was united in marriage on December 31, 1963 to Gary Benjamin Hunt from Tahlequah OK and later sealed together for time and all eternity in the Church of Jesus Christ of Latter-day Saints’ temple in Kailua, HI.

Voncile earned a degree in speech pathology and worked as a speech therapist in several schools. She continued her education to earn a master's degree at Lincoln University in Jefferson City MO. She spent a majority of her career employed by the state of Missouri’s Department of Elementary and Secondary Education and the Department of Corrections. She then continued her career in speech pathology as a private consultant to local skilled nursing facilities before she finally retired.
Voncile later served a year-long mission for the Church of Jesus Christ of Latter-day Saints at the Family History Library in Salt Lake City UT assisting interested patrons in family history research.

Voncile found joy and fulfillment in her role as a wife, mother, grandmother, “gigi”, sister, and friend, as well as in family history, quilting, and the unconditional love she so freely gave in her service to all. Her legacy will live on in memory of those whose hearts she touched. She exemplified the Savior Jesus Christ through her Christlike love that came so natural to her. What a sweeter place this world would be if we could all so selflessly love as she did.

Those wishing to send condolences may do so at www.dulletrimble.com.
To send flowers to the family in memory of Veda Voncile Hunt, please visit our flower store.