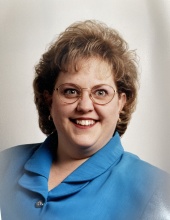 She was born March 31, 1966, in Jefferson City, the daughter of the late Robert Joseph and Judith Ann (Carver) Iven.

She was a 1984 graduate of Helias High School and received her bachelors degree from Northeast Missouri State University.

Terri worked for the Girl Scouts and for the State of Missouri Social Services in the Medicaid Fraud Division.

She was a member of St. Peter Catholic Church and was past President of the Jaycee’s.

Mass of Christian Burial will be 10 a.m. Friday, March 26, 2021, at St. Peter Catholic Church with the Rev. I.C. Medina officiating. The service will be live streamed for those who wish to watch from home. The link can be found on Theresa’s obituary page under Tribute Wall at www.dulletrimble.com.

Memorials are suggested to Theresa’s family in care of Robin Iven.

Those wishing to send condolences to the family may do so at the www.dulletrimble.com website.
To send flowers to the family in memory of Theresa Ann Iven, please visit our flower store.