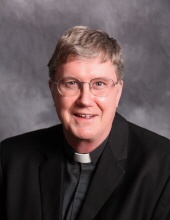 Father David Maher was born on April 7, 1945, in Kansas City, Missouri, the son of the late Vincent and Gabriella (Spelman) Maher. He had eight brothers: Patrick, Phil, Dennis, Paul, Bill, Dan, Tom and Bob. A brother, Terry Maher, preceded him in death.

Father Maher attended Renick Public School and Slater Public School from 1951-1959. He studied at St. Thomas Aquinas Seminary from 1959-1963; Immaculate Conception Seminary in Conception, Missouri from 1963-1971 receiving a Bachelors degree in Philosophy in 1967 and Masters degree in Theology in 1971. Father Maher was ordained to the Holy Priesthood of Jesus Christ on June 5, 1971, at St. Joseph Church in Slater, Missouri, by the Most Reverend Michael F. McAuliffe, Bishop of Jefferson City.

Father Maher celebrated his 25th Anniversary of Holy Priesthood on June 2, 1996, at Mary Immaculate Church in Kirksville. He celebrated his Golden Jubilee on June 5, 2010 at St. Joseph Church in Westphalia. Father Maher had a quiet demeanor and was a very spiritual priest. He had a strong devotion to the Curé of Ars. Father Maher was an early promoter of computer science. He loved his Irish heritage, especially its literature and culture. He was a fearless traveler and an avid reader of literature.

Father Dave, affectionately known as “Preach” by some of his brothers and sisters and Slater friends, was a true renaissance man who loved literature, art, cooking, music, traveling, reading, children, and God. He had a wonderful sense of humor and enjoyed any gathering of friends and family. He was loved by all that knew him and will be dearly missed.

He is survived by eight brothers Pat (Cookie) Maher of Ogalalla, NE; Phil (Kathy) Maher of Newnan, GA; Dennis (Gen) Maher of Wesley Chapel, FL; Paul (Shirley) Maher of Decatur, TX; Bill (Patricia) Maher of Liberty, MO; Dan (Alexandra) Maher of Batesville, IN; Tom (Cheryl) Maher of Nixa, MO; and Bob (Michelle) Maher of Overland Park, KS; 25 nieces and nephews; and 39 great nieces and nephews . He was preceded in death by his mother and father and his youngest brother, Terry.

The concelebrated Mass of Christian Burial will be Friday, November 15, 2019, at 11:00 am at the Cathedral of St. Joseph in Jefferson City. Bishop Emeritus John R. Gaydos will preside and the homilist will be his classmate, Father John W. Groner.

Memorials are suggested to the Diocese of Jefferson City Vocation Fund.

Those wishing to email tributes or condolences to the family may do so at the www.dulletrimble.com website.
To send flowers to the family in memory of The Rev. J. David Maher, please visit our flower store.