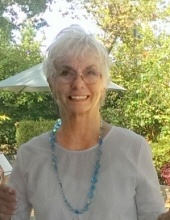 She was born Thanksgiving Day, Nov. 20th 1941 in Linn Mo, to Ronald (Fritz) Herndon and Marguerite McMichael Herndon.
Terry commuted to Jefferson City to complete her senior year at Helias High School, graduating in 1959, young in her class after accelerating an early grade. She excelled at business college in Kansas City and began her extensive work career as executive secretary, with the JC Chamber of Commerce. Over the decades she enjoyed learning the intricacies of higher education, insurance, healthcare and government, through the leadership professionals she assisted until her retirement in 2006. Besides her decade home with her children, her fondest memories were working for the Honorable Christopher “Kit” Bond, during his campaign days, term as State Auditor, and finally as executive staff secretary during his service as Governor in the 70s.

Terry was also passionate about serving others too. In 1970 she was honored as “Outstanding Young Woman of the Year” by the Council of Clubs for her volunteer contributions in community leadership. This included mental health outreach, 4H leadership, St Mary’s Auxiliary, and event organization of the Cole Co Fair as president of the Jaycee Wives. She continued to volunteer in many capacities throughout her life serving Catholic Refugee Relocation, Hospice, Red Cross at disaster sites and also musically through student outreach with MO Blues Club and playing piano in nursing homes. She always had a heart for the hurting or discounted; and often chorused the “more the merrier!” including many a soul she encountered without family, to our holiday celebrations.

Thus, Terry is fondly remembered as generous, spirited, spontaneous, creative, open-minded and musical. She was an accomplished pianist, loving her days in Jazz Band at Linn High School and also playing the flute. She studied classical music at Lincoln University and encouraged her grandchildren in their musical pursuits. Terry also enjoyed writing freelance for the Jefferson City Telegraph newspaper in the mid-2000s and having a haiku published online in the USA Today. She was always up for a concert, theater production, painting class, flea market or spur-of-the-moment road trip. Her home was ever warm and welcoming with her decorating flair. Terry remained high-energy into her final months with even the last to know her, aware of her humor and spunk.

Teresa is survived by her husband of 15 years, Dwayne Batye who survives in Holts Summit. She is also dearly missed by her four children from her marriage in 1960 to James P DeLong who preceded her in death - Michelle (Robert) Hedges of St. Louis, Lisa (Kurt) Mankin of Jefferson City, Jay (Megan) DeLong of St Louis and Tony DeLong of Holts Summit; six grandchildren – Shea Mankin, Ryan Mankin, Aaron Mankin, Jace Mankin, Otis DeLong and Vance DeLong, her sisters Ronda Gross and Noel Arnold, and brother John Michael Herndon. One sister, Kathleen Senzee, preceded her in death.

An internment Mass and Celebration of Life is being planned for later in July.

Condolences may be shared through www.dulletrimblde.com.

Memorials are suggested to Catholic Charities.

To send flowers to the family in memory of Teresa DeLong Bayte, please visit our flower store.