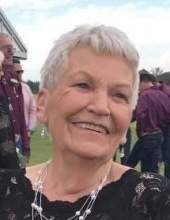 She was born November 10, 1936, in Jefferson City, the daughter of Herman John and Emily Altazero (Hagann) Pirner.

She was a graduate of Cleveland High School in St. Louis.

She was united in marriage on May 31, 1958, at St. Martin Catholic Church in St. Martins to Allan Herman Porting who preceded her in death on May 31, 2016. Shirley and Allan celebrated 58 years of marriage prior to his passing.

Shirley was a wonderful homemaker, helping to raise her children, grandchildren, and great-grandchildren. She loved baking and cooking; she made amazing cookies, pies, and her family’s homemade ice cream recipe. She loved playing cards, going to the casino, traveling, and her time in retirement in Texas. Shirley was fiercely independent and lived at home until nearly the end.

She was a member of St. Martin Catholic Church where she served as funeral meal director, secretary for the parish picnic, and served on the parish council. She was a Den Mother of Cub Scouts Pack 12 at St. Martins.

She was preceded in death by her parents; her husband, Allan Porting; a son, David Porting; a son-in-law, Ryan Brookins; and two sisters, Dorothy “Dot” Economon and Anna Fritz.

Funeral service will be 10:30 a.m. Wednesday at Dulle-Trimble Funeral Home with the Rev. Jason Doke officiating.

Those wishing to send condolences to the family may do so at the www.dulletrimble.com website.
To send flowers to the family in memory of Shirley Jane Porting, please visit our flower store.