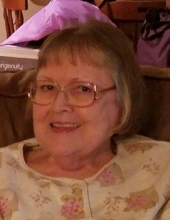 She was born December 14, 1947, in Waynesville, Missouri, the daughter of the late Sherman Luther and Burla Genevia (Breedlove) Deberry.

Shirley was a 1966 graduate of Richland High School.

She was united in marriage on June 21, 1973, in Richland, Missouri to James Thomas McKenney who survives at the home.

Shirley worked for Waterloo Industries in Sedalia as a switchboard operator and in administration.

Throughout her life, Shirley always remembered her family and friends’ special events by sending them a card. In her retirement years, she enjoyed playing the card game Hand & Foot with her friends.

She was preceded in death by her parents; and a brother, Larry Gene Deberry.

Graveside service will be 1 p.m. Friday, November 16, 2018, at the Missouri State Veterans Cemetery at Fort Leonard Wood in Waynesville, Missouri.

Those wishing to send condolences to the family may do so at the www.dulletrimble.com website.
To send flowers to the family in memory of Shirley Genevia McKenney, please visit our flower store.