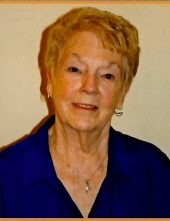 She was born October 24, 1932, in Poplar Bluff, Missouri, the daughter of the late Cleo Burl and Letha Faye (Adams) Abbott.

Shirley was united in marriage on February 20, 1950, in Jefferson City to William Roger Pirner who preceded her in death on May 19, 1997. On December 5, 1999, she married Norbert George Kempker who survives at the home.

Shirley was a loving homemaker and worked for a small time at Goldies at the Mall.

She was a member of the Cathedral of St. Joseph. Shirley enjoyed card games, spending time at the Lake, traveling, knitting and crocheting, and most of all being with her family and friends.

Mass of Christian Burial will be 11 a.m. Monday, at the Cathedral of St. Joseph with the Rev. Louis Nelen officiating.

In lieu of flowers, memorials are suggested to the Alzheimer’s Association or to the American Cancer Society.

Those wishing to send condolences to the family may do so at the www.dulletrimble.com website.
To send flowers to the family in memory of Shirley Ann Pirner Kempker, please visit our flower store.