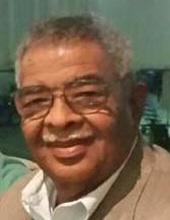 A celebration of his life will begin on Tuesday, February 5, from 6:30 pm to 8:00 pm at Dulle-Trimble Funeral Home, 3210 N. 10 Mile Drive, Jefferson City. Visitation and Memorial Services will be held on Wednesday, February 6, at Arnold Funeral Home, 425 S. Jefferson Street, Mexico, Missouri. Visitation will be at 11:00am. Services will be at noon. Interment will follow at East Lawn Memorial Park in Mexico.

Sherman was born June 5, 1941 in Columbia, Missouri, the son of Sherman Hayes Sr. and Margaret (Reed) Hayes. On May 10, 1959 in Mexico, he married Dora A. Clark. The beautiful couple has been married for 60 years.

Sherman attended Lincoln Lab High School. He graduated with honors from Lincoln University with a Bachelor’s of Science degree in Mechanical Technology and a Master’s of Arts Degree in History. After 41 years of dedicated service, Sherman retired as the Building and Plant Manager for the Missouri Division of Employment Security. He took pride in knowing that all facilities throughout the state were operational and maintained at the highest level each and every day.

Sherman received gubernatorial and mayoral recognition for his years of dedicated service to the state of Missouri and city of Holts Summit. Serving 17 years as Chairman of the Planning and Zoning Commission, he was instrumental in the future growth and development of city and how it looks today.

Memorial donations may be made to Hospice Compassus, c/o Arnold Funeral Home, 425 S. Jefferson, Mexico, MO 65265
To send flowers to the family in memory of Sherman E. Hayes, please visit our flower store.