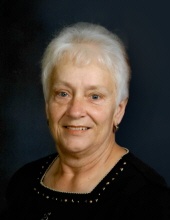 Sally Marie Sabina (Remick) Heislen, 78, of Jefferson City, passed away Wednesday, May 25, 2022, at Summit Villa in Holts Summit surrounded by her family.

She was born August 12, 1943, in Red Lake Falls, Minnesota, the daughter of Roy Joseph and Sabina Elizabeth (Bendel) Remick.

Sally was a 1961 graduate of Helias High School.

She was united in marriage on November 26, 1964, at Immaculate Conception Catholic Church in Jefferson City to Gerald Lee “Jerry” Heislen who preceded her in death on April 9, 2016.

Sally was a homemaker for over 18 years, worked for Dix Road Cleaners, and was a clerk for the Missouri Probation and Parole Board.

She was a member of St. Peter Catholic Church. Sally was all about family. She served in many capacities such as room mother, chairperson for events, and volunteering in the St. Peter School cafeteria. She attended and supported all sporting events, often earning the nickname “Megaphone Sally” for her loud cheering. She was a member of St. Mary’s Auxiliary, volunteering in the gift shop and at the Ice Cream Social. She was very strong in her faith, often attending noon Mass and taking communion to the homebound.

She volunteered at the Special Learning Center and loved seeing all the children. Sally played cards for over 50 years with the same group of ladies. She loved going on bus trips and Friday night dinners out with a group of friends. She enjoyed yard work and sitting on the porch swing with a frosty mug at the end of the day. Most of all, she loved Sunday family BBQ’s with family and her beloved shell macaroni and sprinkle cheese.

She was preceded in death by her parents; her husband, Jerry Heislen; one sister, Gloria (Bob) Donehue; father and mother in-law, Clarence “Dick” (Erma) Heislen; and brother-in-law, Julian “Fuzzy” LePage.

Mass of Christian Burial will be 11 a.m. Saturday at St. Peter Catholic Church with the Rev. Jeremy Secrist officiating.

Memorials are suggested to the Special Learning Center, St. Peter Catholic Church, or to the Helias Foundation.

To send flowers to the family in memory of Sally Marie Heislen, please visit our flower store.