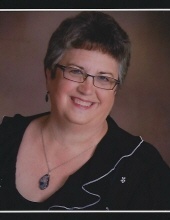 She was born July 23, 1960, in Jefferson City, the daughter of Jimmie Louis and Dolores Helen (Kempker) Kelsey.

Sally was a 1978 graduate of Helias High School.

She was united in marriage in 1979 to Donald Eugene “Donnie” Lane, Jr. who survives at the home.

Sally worked as a waitress and for Kent George Plumbing before staying at home to care for her children. She then spent the next 31 years providing child care services to the community and her family.

She was a member of St. Francis Xavier Catholic Church in Taos and volunteered as a Cub Scout and Girl Scout mother for her children. She enjoyed sewing and cross stitching, scrapbooking, playing with puzzles, traveling, taking photos, and spending weekends at the family farm.

She was preceded in death by her father, Jimmie Kelsey.

Memorials are suggested to Sally Lane’s family for the benefit of her grandchildren for education.

Those wishing to email tributes or condolences to the family may do so at the www.dulletrimble.com website.
To send flowers to the family in memory of Sally Ann Lane, please visit our flower store.