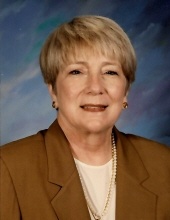 She was born on May 16, 1938, in Walcott, Arkansas, the daughter of the late Byron and Talmadge (Welch) Billingsley.

She was married on October 26, 1957, in Hernando, Mississippi to Norman L. Ward who survives at the home.

She was member of Concord Baptist Church and Missouri Retired Teacher Association. Fern was an ombudsman for senior citizens, a docent at the Missouri Governor’s Mansion, and a docent at the Cole County Historical Society.

Fern had a passion to learn and spent her free time reading. She enjoyed antiquing and going to auctions. She thoroughly enjoyed hour long conversations on the phone with each of her sisters. A pillar of strength for her family, Fern loved and cherished being with her grandchildren.

A memorial service will be held at a later date.

Those wishing to post tributes or condolences to the family may do so at her obituary on the www.dulletrimble.com website.
To send flowers to the family in memory of Ruthie Fern Ward, please visit our flower store.