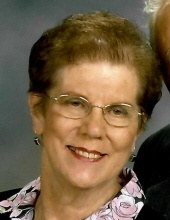 Ruth Jane Schaefer, 84, of Taos, went to be with her Heavenly Father on Friday, December 11, 2020, at Heisinger Bluffs, surrounded by her family.

She was born September 29, 1936, the daughter of the late Louis Aloysius and Anna Regina (Schmidt) Benne.

She was a 1954 graduate from St. Peter’s Catholic School in Jefferson City.

Ruth spent most of her career at Missouri River Regional Library until retirement. She also had worked for Howerton Electric Co., Missouri Department of Revenue, and Thomas Jefferson Library.

Ruth enjoyed dancing, traveling, sewing, crafts, TV game shows, watching St. Louis Cardinals Baseball and playing checkers with her grandkids. Ruth was a member of the Jefferson City Host Lions Club, 4th Degree St. Jude’s Chapter of the Knights of Columbus Auxiliary and a devoted member of St. Francis Xavier Catholic Church in Taos. Ruth was very active in her children’s school being a room mother and volunteering often. She loved being involved with the RCIA program at church and being a communion minster and lector.

Mass of Christian Burial will be 11 a.m. Thursday at St. Francis Xavier Catholic Church in Taos with the Rev. Michael W. Penn officiating. The service will be live-streamed for those who wish to watch remotely. The link can be found on Ruth’s obituary page under Tribute Wall at www.dulletrimble.com.

Dulle-Trimble Funeral Home is in charge of the arrangements.
Those wishing to send condolences to the family may do so at the www.dulletrimble.com website.
To send flowers to the family in memory of Ruth Jane Schaefer, please visit our flower store.