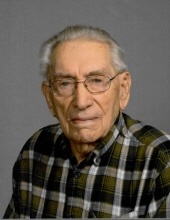 Rudy was born August 19, 1925, in St. Joseph, Louisiana, the eldest son of the late John and Maria Anna (Krueger) Lemke.

During World War II, Rudy served in the U.S. Army Air Corps from November 1943 to April 1946. Following the war, he went to college on the GI Bill, graduating from Southwest Louisiana Institute with a B.S. in Civil Engineering.

In 1951, he began working for the Bureau of Public Roads, now the Federal Highway Administration. During a career that spanned 30 years, he served as a Federal Highway Administrator, managing federal highway programs within the states of Arkansas, Louisiana, Texas, Delaware, and Missouri, planning and developing the Interstate Highway System across the United States. His last position was as Overall Division Administrator for the state of Missouri.

Rudy was a member of the Cathedral of St. Joseph where he served as sacristan for many years. During that time, he enjoyed taking communion to the sick in the hospitals. He always had a great love and respect for the priests and thoroughly enjoyed taking them to breakfast after Mass each morning. Rudy was also active in the Knights of Columbus and American Legion Post 5.

After his marriage to Dorothy in 2001, Rudy began assisting her in efforts to provide eyeglasses to the poor in the Yucatan of Mexico and in establishing nutrition programs for school children there. In 2003 Rudy and Dorothy started the Merida Foundation to expand this work. Today the Merida Foundation feeds over 500 children each school day at multiple sites.

The general public is welcome to attend the services while following social distancing guidelines. Facial coverings are greatly appreciated while in attendance.

Those wishing to email tributes or condolences to the family may do so at the www.dulletrimble.com website.
To send flowers to the family in memory of Rudolf Michael "Rudy" Lemke, please visit our flower store.