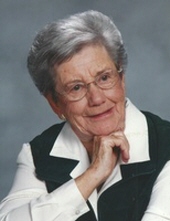 She was born November 3, 1923, in Russellville, Missouri the daughter of the late L.V. and Emma (Raithel) Morrow.

Ruby was a secretary for Fowler Short legal firm when she retired. She also worked at the Sac River Valley Bank, both in Stockton, Missouri. She attended school in Russellville and moved to Cole Camp, Missouri where she lived with her uncle, J W Morrow, to complete her last two years of high school. While living there, she met her future husband, Henry Tucker. They lived in Stockton for over 45 years.

Ruby was a loving wife and mother, raised 4 children and was an excellent homemaker. She enjoyed sewing and cooking. She was an active member of the Stockton United Methodist Church. She also volunteered at the Springfield Convention and Visitors Bureau. After suffering a stroke, she moved to League City, Texas, in 2007 to be near her daughter.

She was preceded in death by her parents; her husband; and three sons, Dr. James “Jim” Tucker, DO; Robert “Bob” Tucker; and Gary Don Tucker.

Visitation will be at Scrivner-Morrow Funeral Home in Russellville at 10 a.m. on Tuesday, September 5, 2017, with the funeral service to follow at 11 a.m. with the Rev. Dinzel Webb officiating.

Scrivner-Morrow Funeral Homes in Russellville is in charge of the arrangements.
To send flowers to the family in memory of Ruby Rebecca Tucker, please visit our flower store.