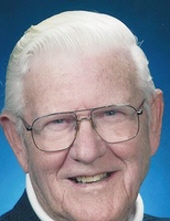 Roy Thomas Hardin, 86, of Russellville, passed away Saturday, February 24, 2018, at his home surrounded by family.

He was born May 25, 1931 near Guntersville, Alabama on Bishop Mountain, the son of the late Buford F. and Laura (West) Hardin.

Roy worked for Chrysler in Detroit before returning to Alabama to work for Redstone Arsenal. He eventually moved to St. Clair, Mo to work for Chrysler in Fenton, Missouri. Over his many years with Chrysler, he worked at various positions before retiring as a body repairman in 1986. In 2002, they moved to Russellville to be closer to family.

He enjoyed fishing, hunting, and carving canes as well as working in his basement shop, building and repairing almost anything. His greatest enjoyment was spending time with his family, especially his grandchildren. They were his pride and joy.

He was preceded in death by his parents; his wife, one son, Thomas DeWayne Hardin; and three brothers, Ray Hardin, Kenneth Hardin, and Ernest Hardin.

Visitation will be 4-7 p.m. Wednesday, February 28, 2018, at Scrivner-Morrow Funeral Homes in Russellville.

Scrivner-Morrow Funeral Homes in Russellville is in charge of the arrangements.
To send flowers to the family in memory of Roy Thomas Hardin, please visit our flower store.