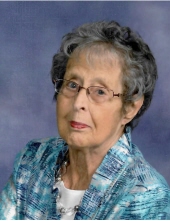 She was born on November 9, 1928 in Meta to John B. and Antonia (Luebbert) Scheppers.

Roxana was in the second graduating class from St. Peter High School in 1946.

She was a member of St. Peter Catholic Church, the Ladies Sodality and a charter participant with Perpetual Adoration. She was also a member of St. Mary’s Hospital Auxiliary.

Roxie loved to spend time with her family. Jim and Roxie both loved to dance and in their earlier years belonged to the Guys and Dolls Dance Club. They were amazing dancers and a delight to watch. Even after Jim’s death, Roxie would listen to her music and dance around the house. She loved gardening and her flowers as well as spending time outside watching the birds and enjoying nature. Every spring the seven azalea bushes around her home were gorgeous in full bloom. Thanksgiving was a particularly special time for the family because that was the one time a year that Roxie made her family her famous ice cream pumpkin pie recipe. Her recipe was sought after and published in several local cookbooks, but NO ONE made it like she did.

She and her husband spent lots of time travelling across the USA and Canada. After his death, Roxie and her daughter, Mary, enjoyed more traveling in the USA, even visiting Hawaii and Mexico several times. Roxie enjoyed the beach and the mountains, especially the Grand Tetons in Wyoming. Many treasured and priceless memories were made on these trips.

In her early years, Roxie grew up in Westphalia and Folk. Her parents owned a popular family restaurant in downtown Westphalia that served delicious fried chicken. She and her mother enjoyed Saturday rituals of cleaning followed by hours of fishing on the Osage or Maries River.

She was preceded in death by her husband, Jim; a son, James “Woody” Woodland; two brothers, Lambert Scheppers and August (Imelda) Scheppers; and a sister Lorain (Frank) Jones.

Mass of Christian Burial will be 12 Noon, Saturday, May 15, 2021 at St. Peter Catholic Church, with the Rev. James Finder officiating.

Those wishing to email tributes or condolences to the family may do so at the www.dulletrimble.com website.
To send flowers to the family in memory of Roxana Mae Woodland, please visit our flower store.