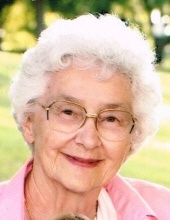 ** THE SERVICE LOCATION HAS CHANGED. ALL SERVICES WILL BE HELD AT THE CATHEDRAL OF ST. JOSEPH, 2305 WEST MAIN STREET, JEFFERSON CITY, ON SATURDAY, FEBRUARY 20, 2021. **

She was born November 16, 1926, in Jefferson City, the daughter of Samuel Henry and Emma Margaret (Hoelscher) Hager.

She was married on February 16, 1952 in Jefferson City to Charles Andrew (Chick) Scheppers, who preceded her in death on November 28, 2000.

Rosemary was a 1945 graduate of St. Peter High School and received a teaching certificate at Central Missouri State University in Warrensburg. After graduation, she taught grades 1-4 in a single classroom at Osage Bend School. She then was a bookkeeper at Metropolitan Life Insurance Company in Jefferson City and later in Chicago, IL.

Once she and Chick returned to Jefferson City, they began their family business, Scheppers Electronics, on the Southside (Old Munichberg) where she was co-owner and office manager for 18 years. She and Chick were one of the first Jefferson City businesses to sell televisions after KOMU-TV first broadcast in 1953 and before KRCG-TV went on the air in 1955.

It was common for friends and family to drop by their home and business at a moment’s notice and stay for dinner or for her to bake and deliver coffeecakes to friends all while managing the store.

Rosemary then became a full-time homemaker where she excelled at landscaping, gardening, and foraging through their woods. She relished early morning hikes over the hills or in the valleys to pick wild blackberries, gooseberries, or hunt for morel mushrooms, which she could spot yards away. She always hiked with her favorite hoe and trusty dog just in case of snakes, which she could spot even further away. She was also instrumental in Chick’s beekeeping business. The two worked side-by-side to process, bottle, and deliver honey to mid-Missouri businesses and patrons who appreciated local honey.

After Chick passed away, she relocated to a new neighborhood with a simpler lifestyle. She was first to welcome new neighbors with a warm loaf of her homemade French bread or a fresh-picked tomato. She spent summer evenings outdoors on her porch or swing where neighbors, family, and friends stopped by to discuss the day’s events. She was blessed with tremendous neighbors.

Rosemary’s mother taught her to sew and quilt, and she frequently assisted her mother, aunts, and friends at their quilting bees. As an adult, she was often sought out for advice on quilt design or construction, and she freely encouraged and guided both beginner and advanced quilters. Moreover, she delighted in learning new techniques and designs from others. Several of her quilts were displayed at a juried competition at the International Quilt Show in Houston, TX. In 2001, she was honored with her own quilt show, “Tradition and Innovation,” at the Rozier Gallery in Jefferson City.

In the mid 1980s, Rosemary opened her home to other quilting enthusiasts for monthly gatherings to share designs, techniques, and encouragement. Along with her friends, Rosemary was a charter member of the Missouri River Quilt Guild. What began as a small gathering grew to a membership of over 150 people. In 2015 she was honored as Member Emeritus. The group continues to be instrumental in quilt education, documentation, and support.

Rosemary was a life-long member of St. Peter Catholic Church and the Ladies Sodality. She prayed weekly in the adoration chapel for over 25 years and was a member of the St. Peter Quilting Group for 35 years where their weekly sessions were full of fun and friendship.

In her spare time, Rosemary also enjoyed china painting, playing cards, cooking, baking, traveling, fishing, and gardening. She was an avid reader, who delighted in book discussions with her friends. Nevertheless, she always had time for her children, grandchildren, nieces, and nephews and would pause whatever she was doing to help them. She gladly and enthusiastically enjoyed helping people. It was second nature for her to be encouraging, and she was an especially good listener. Her family is blessed by her steadfast love and the values of hard work, faith, and family that she imparted to them.

She was preceded in death by her parents; her husband; two brothers, Paul (Norine) Hager and Bill Hager; two sisters, Bernice (Leonard) Hartley, and Lillian (Ken) McConnell; and a brother-in-law, Bill Yancey.

Mass of Christian Burial will be at 11 a.m., Saturday, February 20, 2021, at the Cathedral o St. Joseph with the Rev. Jeremy Secrist officiating. The service will be live streamed for those who wish to watch from home. The link can be found on Rosemary’s obituary page under Tribute Wall at www.dulletrimble.com.

Visitation will be on Saturday from 10 a.m. until the time of service. The general public is welcome to attend the services while following social distancing guidelines. Facial coverings are encouraged while in attendance.

A second memorial Mass and celebration of life will be held once COVID conditions have improved.

Those wishing to send condolences to the family may do so at the www.dulletrimble.com website.
To send flowers to the family in memory of Rosemary Scheppers, please visit our flower store.