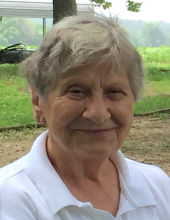 She was born January 15, 1936, in Burgalben, West Germany, the daughter of Helena and Wilhelm Dauenhauer. In 1959 she wed Otis R. Guinn and immigrated to the United States.

Rosie was beloved by all who met her for her indomitable spirit and sense of humor. Being in a military family she sojourned with her family from Germany to many places: Leesville, La, Killeen, Texas, Ft. Bragg, NC, Baumholder, Germany, Ft. Bliss, Texas and Ft. Campbell, Ky., before arriving at Ft. Leonard Wood and Waynesville, Mo. From there, Rosie and Otis retired to Jefferson City and eventually East Texas before coming back to Holts Summit. In her later years she loved gardening, walking and working outdoors but her greatest passion was her family.

She is survived by her husband of 60 years, Otis Guinn, her beloved daughter Tina Carey, both of Holts Summit, and her eldest son, Klaus Hoch, of Los Angeles, Ca.

She was preceded in death by her son Bobby Ray Guinn.

At her request, there will be no memorial service. All expressions of sympathy can be made with a donation to the Callaway Hills Animal Shelter in New Bloomfield, MO 65063.

Those wishing to send condolences to the family may do so at the www.dulletrimble.com website.
To send flowers to the family in memory of Rosamaria "Rosie" Guinn, please visit our flower store.