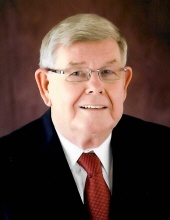 He was born December 21, 1939, in Jefferson City, the son of Hubert and Myrina (Stegeman) Wolken.

A 1958 graduate of Helias High School, Ron served his country in the United States Army and United State Army Reserves.

He was united in marriage on January 5, 1963, at the Immaculate Conception Catholic Church in Jefferson City to Charmaine Laura Thompson who preceded him in death on January 14, 2009.

After serving in the military, he came back to Jefferson City and worked in various printing companies. He co-founded the Jeff-City Printing Company in 1972 and became the sole owner in 1978. Ron loved his customers and considered them his friends. He retired in 2006 but continued to work with the new owners for several years. Later, he worked for Riley Chevrolet driving their courtesy van.

He was a member of Immaculate Conception Catholic Church and Knights of Columbus Council #1054. Ron was an early and involved promoter of the Helias Foundation and was one of their 2012 Hall of Fame Honorees. Because of his commitment to the community, Ron was also an active supporter of the Vitae Society and the Samaritan Center, where he was a dedicated weekly volunteer.

Ron had exceptional gifts and talents that he used during his retirement to help other people. He was an endless task master. When he became in charge of the grounds for the Georgetown Homeowner’s Association where he lived, Ron knew exactly how to get things done on a timely basis and with great expertise. He took great pride in making sure the lawns were mowed properly, snow was removed, and the Christmas lights installed. Ron frequently rode his golf cart around the neighborhood overseeing anything that needed to be done.

Watching his sons and grandchildren play sports was his favorite thing to do and he was an avid St. Louis Cardinals baseball fan.

He was preceded in death by his parents, his wife, and two brothers-in-law, Bob Snoddy and Steve Weiner.

Mass of Christian Burial will be 11 a.m. Friday, August 27, 2021, at Immaculate Conception Catholic Church with the Rev. Donald Antweiler officiating. The service will be live streamed for those who wish to watch from home. The link can be found on Ron’s obituary page under Tribute Wall at www.dulletrimble.com. The family asks that all guests attending services wear a mask and practice social distancing.

Memorials are suggested to Helias Foundation, Vitae Society, or to Samaritan Center.

Those wishing to send condolences to the family may do so at the www.dulletrimble.com website.
To send flowers to the family in memory of Ronald Joseph Wolken, please visit our flower store.