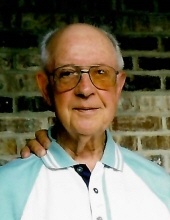 He was born on September 22, 1925, in Washington, Missouri, the son of the late William A. and Elizabeth Ann (Juergensmeyer) Borgmeyer.

He was united in marriage on September 23, 1978, in Jefferson City to Hazel Odessa Mason Goff, who preceded him in death on February 23, 2006.

He was a member of St. Peter Catholic Church and a life member of Veterans of Foreign Wars, Post 1003, and the American Legion.

Roman enjoyed gardening, keeping his car clean, and traveling in the United States with his wife.

He was preceded in death by his parents; a stepson, Ed (Gwen) Goff; two brothers, Wilbert “Bert” (Edna) Borgmeyer, and James (Evelyn) Borgmeyer, and a sister, Imogene (Freddie) Holterman.

Facial coverings and social distancing are suggested while in attendance.

Dulle-Trimble Funeral Home is in charge of the arrangements.
To send flowers to the family in memory of Roman Anthony Borgmeyer, please visit our flower store.