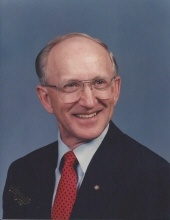 He was born on September 3, 1935, in Fullerton, Nebraska, the son of the late Ernest Glenn and Marguarite Louise Wolters Hopwood.

He was married on June 23, 1957, in Central City, Nebraska, to Margaret Ann Bannister who survives at the home.

Mr. Hopwood was a 1954 graduate of Fullerton (Nebraska) High School and a 1959 graduate of the University of Nebraska where he received a Bachelor of Science degree.

A U.S. Army veteran, he retired in September, 1998, as Director of Public Affairs for the South Region of G.T.E. (now Verizon) where he was employed for forty years.

Mr. Hopwood was a member of First United Methodist Church and its Helping Hands group.

He was a past president of the Rotary Club of Columbia Northwest, the Columbia Chamber of Commerce, and the Administrative Management Society.

He was a fifty-year member of Twilight Lodge No. 114, Ancient Free & Accepted Masons and a 32-degree member of Scottish Rite Bodies.

He enjoyed Golf, reading, and home and yard-work.

Mr. Hopwood was a patient and liaison volunteer for ten years with the Medical Center of the Rockies.

He was preceded in death by two brothers-in-law, George Hagman and Ralph Wilhelmi.

Those wishing to send condolences to the family may do so at the www.dulletrimble.com website.
To send flowers to the family in memory of Rolland Eugene Hopwood, please visit our flower store.