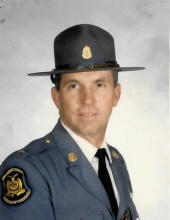 Bob was a 1964 graduate of Hillsboro High School, attended Jefferson College and graduated in 1970 from Kansas State University with a Bachelor of Science degree. He played baseball throughout his college career at both JeffCo and K-State. He also completed the Northwestern University Traffic Institute Training Program from 1979-1980.

He was united in marriage on October 3, 1970, in House Springs, Missouri to Sandra “Sandi” Hayes who survives at the home.

He was a member of St. Martin Catholic Church, charter member of Knights of Columbus Council 7194, St. Jude’s Fourth Degree Assembly 1567, the Missouri Troopers Association, THE MASTERS, the Kansas State University Alumni Association, and the K-Club.

Burial will be a private family service in the St. Martin Catholic Cemetery.

Memorials are suggested to St. Martin Catholic Church, Vitae Foundation, or to THE MASTERS.

Those wishing to send condolences to the family may do so at the www.dulletrimble.com website.
To send flowers to the family in memory of Robert "Bob" Gartner, please visit our flower store.