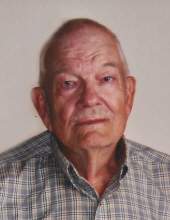 He was born on February 1, 1939, in Kansas City, Missouri, to the late Newton Sylvester and Pauline Ann (Bax) Burns.

Robert worked over thirty years as a carpenter for Associated Building Centers. In addition, Robert farmed all his life.

Robert, known to all as Bob, loved to tinker and could build anything, especially if it was mechanical. He was well known among his family for his carpentry skills, fixing anything mechanical and rebuilding lawn equipment. He loved being outdoors, living the life of a farmer that included raising cattle and going to farm auctions. Bob was an excellent singer and enjoyed country music. He loved his family and spending time together. His favorite times were spent with his grandchildren and great-grandchildren.

Burial will be in St. Andrews Catholic Cemetery.

Those wishing to email tributes or condolences to the family may do so at the www.dulletrimble.com website.
To send flowers to the family in memory of Robert Newton Burns, please visit our flower store.