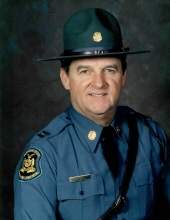 He was born December 10, 1934, near Perryville, Missouri to Floyd Joseph and Pauline (Cattoor) Hagan. He was the fourth of five children and the only boy.

Bob’s family moved to St. Louis when he was still a young child. He graduated from Beaumont High School and went on to receive his degree in Criminal Justice from Lincoln University.

He served his country in the United States Navy Reserves.

He was married to Marcia C. Nowakowski on January 14, 1956, at St. Adalberts Catholic Church in St. Louis. They had three children and enjoyed sixty-five years of marriage. She preceded him in death on March 13, 2021.

Bob spent his entire career with the Missouri State Highway Patrol. He began his career in 1956 as a road officer and went on to be an instructor at the training academy. He became a division director and retired with the rank of Captain at General Headquarters. He was on the Dive and Recovery team for a brief time and was a long-time member of the patrol’s Pistol Team, where he won countless trophies and awards. He was among the state’s top marksmen for many years.

He was a former member of Meadow Lake Acres Country Club, the Henwick Lane Gun Club, and the American Legion Forty & Eight and MASTERS.

While he was an amazing and devoted husband and father, his grandchildren will say his true calling was “Grandpa.” Ryan spent countless hours outdoors with his grandpa, hunting, fishing, shooting their bows, and hitting the links at Meadow Lake. He was always up for a trip to the stables to take Brooke to ride “Little Sugar,” and even learned his way (kind of) around the Galleria Mall in St. Louis to take Jennifer to her happy place. His fish fries and barbeques were not to be missed and none of us will ever forget our epic Disney World family vacations. He was dearly loved, and we will miss everything about him.

Survivors include a daughter, Kathy Schanzmeyer, and her family, Jennifer (George) Tergin and their son, Parker, Ryan (Johanna) Schanzmeyer and their daughters, Makayla and Nola, and Brooke (Sam) Wallace; a son, Robert (Sharon) Hagan, Jr., and their daughters, Lauren, and Emily; two sisters, Velma Brightwell, and Sandy (Bob) Greenamay; and many nieces and nephews.

He was preceded in death by his parents, his wife, Marcia, a daughter, Mary Beth (Mark) Sherrell, sisters, Jo (Harry) Babb, Ruth (Roy) Layton, and a brother-in-law, Bill Brightwell.

A private family interment will be held at a later date for Bob and Marcia.

Those wishing to send condolences to the family may do so at the www.dulletrimble.com website.
To send flowers to the family in memory of Robert Joseph Hagan, please visit our flower store.