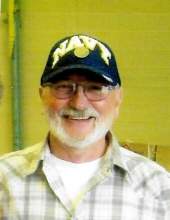 After graduating from South County Technical School in St. Louis, he joined the United States Navy for four years spending most of that time in Guam.

He spent thirty-six years as a heavy equipment operator for Missouri Pacific and Union Pacific Railroads, where he was known as “Cowboy.” He retired in 2010.

Bob was a long-time member of the Church of Christ, Jefferson City, and the American Legion Post #5.

Bob never missed watching a Nascar race when Dale Earnhardt, Sr. was driving. He enjoyed going to races, collecting Nascar cars, and anything mechanical. He was a caring person, a friend to all, and never met a stranger.

A memorial service will be held 2 p.m. Sunday, December 19, 2021, at Dulle-Trimble Funeral Home with the Rev. Russ Pflasterer officiating. Military honors will conclude the service. Following the service, the family will receive friends.
Memorials are suggested to Hospice Compassus, of Jefferson City.

Those wishing to send condolences to the family may do so at the www.dulletrimble.com website.
To send flowers to the family in memory of Robert Glen Bearden, please visit our flower store.