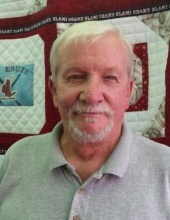 He was born March 22, 1934, in Jefferson City, the son of the late William John and Ruby Jane (Coogan) Deeken, Sr. He attended St. Peter Catholic Grade School and was a 1952 graduate of St. Peter Catholic High School. Robert served his country in the United States Army Air Force during the Korean Conflict and was honored to have flown on the Honor Flight.

For over forty years, Robert was a single father raising six children while working full time in building maintenance. He was extremely proud to have served as Past Commander of VFW Post 1003. Robert was a member the VFW Honor Guard since 2001 having honored over 500 veterans. For many years he taught flag folding procedures at schools, churches and service organizations. Robert was also a past board member of the Cole County Services for the Developmentally Disabled. For years he helped coach Jefferson City Special Olympics softball teams.

Those wishing to email tributes or condolences to the family may do so at the www.dulletrimble.com website.
To send flowers to the family in memory of Robert E. Deeken, Sr., please visit our flower store.