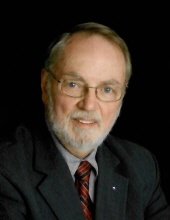 He was born May 20, 1939, in Boonville, Missouri, the oldest of five children to the late John and Carolyn (Holmes) Atkinson.

Bob enjoyed sports and coached Little League when his boys were young. He was a Boy Scout leader for troops in two local churches and was an adult sponsor for trips to Philmont Boy Scout Ranch in Cimarron, New Mexico. He held various positions with the Missouri State Water Commission as well as AWWA. He was a lifetime member of the Missouri Society of Professional Engineers and had served as treasurer on the State and National level as well as being an Outstanding Engineer nominee. He enjoyed serving in various ministries through Cornerstone Baptist Church where he had been a member since 2001. He became a member of The Gideons International in 1986 and enjoyed serving through that Association. He and Sandy attended International Gideon Conventions throughout the United States, stopping to visit family and friends along the way. Bob was always ready to lend a hand to anyone in need, whether it was financial, assisting in a move, or transportation. He was a resourceful person who loved to share with others a good place to eat or an upcoming event in the community.

He was preceded in death by his parents; one brother, J. Paul Atkinson; and two brothers-in-law, Ed Williams and Jay Fudge.

Those wishing to send condolences to the family may do so at the www.dulletrimble.com website.
To send flowers to the family in memory of Robert Donald Atkinson, please visit our flower store.