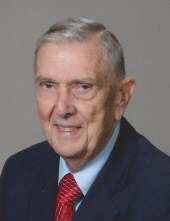 He was born on September 9, 1931, in DuQuoin, Illinois, the son of the late Alfred Lee and Jesse Mame (Nehring) Robison Orbin. His family moved to Macon, Missouri in 1935.

Bob served in the United States Navy from 1950-1954 covering the period of the Korean Conflict. He was stationed on the USS Navarro APA 215 as well as on a Naval air station in North Africa. He rose to the rank of Chief Petty Officer in the Naval Reserves.

He was united in marriage on August 4, 1956, at St. Mary’s Catholic Church in Shelbina, Missouri, to Bernadette Cecilia “Bonnie” Buckman who resides at Oak Tree Villas. They were blessed with sixty-two years of marriage together.

Bob began his career in education employed as an Industrial Arts teacher in 1961 teaching at Bethel, Shelbyville and Neosho, Missouri. Beginning in 1967, Bob worked for the Missouri Department of Elementary and Secondary Education (DESE). At DESE, he served as Supervisor, then Director of Industrial Education for the state of Missouri for approximately thirty years. He worked approximately four years as Coordinator for Vocational Education, retiring in 2001. Bob was Missouri’s first state advisor of the high school program VICA (Vocational Industrial Club of America), now Skills USA. The project Bob is most proud of while employed with DESE was his instrumental involvement in the establishment of the Missouri’s A+ Schools Program, a program that has helped thousands of Missouri students afford college.

He held professional memberships in several organizations including the American Vocational Association (AVA), serving as Vice President of the Trade and Industrial Education Division. Bob was a board member of the national VICA organization for many years. He was also an adjunct professor at the University of Missouri.

Bob was a member of the Immaculate Conception Catholic Church and the Fourth Degree Knights of Columbus. He worked on various church committees including serving as Scout Master for the parish’s Troop 6, and the diocese’s Catholic Committee on Scouting.

Bob enjoyed fishing, deer and turkey hunting, camping and traveling with his family. He and Bonnie traveled extensively visiting all fifty U.S. states and several countries. He enthusiastically worked on old cars when he had time. He proudly owned a 1931 Model A Ford coupe and a 1955 Chevy Bel-Air sport coupe. Bob was a member of the Mid-MO Old Car Club, the Mid Missouri Model A Ford Club, the National Model A Restorer’s Club and served as a judge in fine point automotive contests.

Those wishing to email tributes or condolences to the family may do so at the www.dulletrimble.com website.
To send flowers to the family in memory of Robert Allen Robison, please visit our flower store.