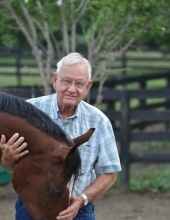 Richard Neil Carter, 90, of Carrollton, Illinois, died Tuesday, August 27, 2019, at the home of his daughter in Springfield, Illinois.

He was born on February 13, 1929, in Carrollton, Illinois, the son of the late John Foster and Bessie Vesti (Little) Carter.

He was a 1947 graduate of Carrollton High School.

A lifelong farmer, Neil was manager of Bluffdale Farms in Eldred, Illinois, from 1968-1988.

He was preceded in death by an infant son; and two brothers, John (Jeanette "Sis") Carter, and Paul (Mary) Carter.

Burial was in the Carrollton City Cemetery.

Those wishing to email tributes or condolences to the family may do so at the www.dulletrimble.com website.
To send flowers to the family in memory of Richard Neil Carter, please visit our flower store.