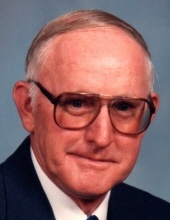 He was born May 23, 1930, in Jefferson City, the son of the late Clem and Carolina (Henke) Schnieders.

Richard was employed at International Shoe Factory for 22 years until the factory closed in 1970. He later worked for the Missouri Department of Corrections for 25 years from 1970-1995.

He was a member of Immaculate Conception Catholic Church. He enjoyed hunting, fishing, and gardening. His special interests was purple martins. He had numerous martin houses and even furnished them with nesting materials.

Mass of Christian Burial will be Friday, 11:30 a.m., November 30, 2018, at Immaculate Conception Catholic Church with the Rev. Geoffrey Brooke officiating.

Those wishing to email tributes or condolences to the family may do so at the www.dulletrimble.com website.
To send flowers to the family in memory of Richard Louis Schnieders, please visit our flower store.