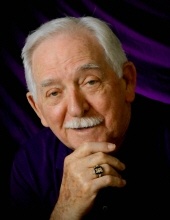 Richard Allen "Dick" Rampy, 86, of Jefferson City, passed away Friday, February 21, 2020, at his residence surrounded by his family.

He was born on July 22, 1933, in Brashear, Missouri, the son of the late Glen Tyhurst Rampy and Thelma Goldie Hayden Rampy.

He was married on August 10, 1952, in Brunswick, Missouri, to Juanita Margaret Tate who survives at the home.

Mr. Rampy was a 1951 graduate of Edina (Mo.) High School where he excelled as an athlete in basketball, track & softball.

He served in the United States Navy and in 2012 he was recognized to participate in the Veteran Honor Flight to Washington DC.

Starting at the age of twelve, he shined shoes in a barber shop in Edina and worked at the soda counter of a drug store while he completed his high school education. This began his life-long example of a strong work ethic. His professional career began with PN Hirsch & Co. for which he later supervised thirty stores until they were bought by Dollar General. He then owned and operated Rampy’s Clothiers in Hannibal, Missouri, for thirteen years until retiring in 1996.

While in Hannibal he was an active layman at Arch Street United Methodist Church where he served in the choir, was chairman of the Administrative Board, and was involved in many other capacities. He was also instrumental in establishing the Hannibal "Discover Downtown" Association.

After residing thirty-seven years in Hannibal, Mr. Rampy and his wife moved to Jefferson City where they were active members of First United Methodist Church and faithful singers in the church choir. Dick was an exceptional golfer, loved woodworking, coin collecting, and fishing. He was especially fond of board games, marbles, and playing cards with his friends and family.

The Missouri House of Representatives honored Mr. and Mrs. Rampy with a resolution on the occasion of their sixty-fifth wedding anniversary.

Visitation will be held at 1 p.m. on Thursday, February 27, 2020, at First United Methodist Church followed by a Celebration of Life at 2 p.m. with the Reverend Trevor Dancer officiating.

Interment will be in Missouri Veterans Cemetery, Jacksonville, Missouri, at a later date.

Dulle-Trimble Funeral Home is in charge of arrangements.
To send flowers to the family in memory of Richard Allen Rampy, please visit our flower store.