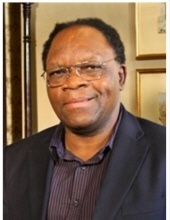 Rev. Aaron Sekwawaedza Madondo, 69, of Jefferson City, went home, surrounded by his family at his home, to be with the Lord on Monday, January 4, 2021.

He was born on June 14, 1951, in Zimbabwe, to the late Robson S. and Rwakutipedza Marita (Matiza) Madondo.

Aaron, a member of First United Methodist Church in Jefferson City, spent his career as an ordained United Methodist minister, working in different conferences in Zimbabwe and the United States of America since 1976. He enjoyed reading and was a world traveler with his beloved wife.

Rev. Madondo was a fearless and an unashamed pioneer. His middle name, Sekwawaedza, mean as much. After finishing his grade 6 (standard six), lack of money would not stop Aaron from being the first in his huge family to go forward with education. He obtained a job, working for a Swedish missionary, at Old Mutare to put himself through secondary school.

Aaron earned diplomas in Theology from Biriwiri and United Theological Colleges, overcoming the odds. Despite it being a longshot, for a poor boy who was not supposed to dream to come to America, Aaron applied to come to the United States to further his education. He went on to do his BA and Masters Degrees at Baker University and St. Paul School of Theology, respectively.

Aaron was a selfless man. Many, relatives, friends and strangers, will remember him for his generosity and passion for education. He helped many relatives and friends go school. He volunteered at Samaritan Center.

He was preceded in death by his wife, parents and several brothers and sisters.

Funeral service will be 11 a.m. Saturday, January 9, 2021, at First United Methodist Church in Jefferson City with Rev. Trevor Dancer officiating. The church will live stream the service on their website at www.jcfumc.org.

Memorials are suggested to the First United Methodist Church Missions.

Those wishing to email tributes or condolences to the family may do so at the www.dulletrimble.com website.
To send flowers to the family in memory of Rev. Aaron Sekwawaedza Madondo, please visit our flower store.