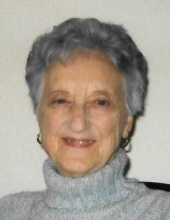 She was born on November 11, 1919, in Moberly, the daughter of Frank Bernard and Mary Elizabeth (Steinkamp) Wegs.

A 1933 graduate of Immaculate Conception Grade School, Regina graduated from Moberly High School in 1937 and Moberly Community College in 1939.

As a young bride, she worked in the Marine Hospital in Decatur, Illinois in 1943 while her husband served in the Army. She continued her career for twenty years with the State of Missouri Department of Health and Senior Services as a stenographer.

She was a member of the Cathedral of St. Joseph and sang in the choir for many years.

Regina enjoyed two square dancing clubs with her husband as well as traveling both here and in Europe. She liked music, singing, and playing the piano. A YMCA member for many years, she was conscious of her health and swam a couple times per week. Regina was an avid painter and especially liked using acrylics and watercolors.

Mass of Christian Burial will be 11 a.m. Thursday, at the Cathedral of St. Joseph with the Rev. Ignitius Nimwesiga officiating.

Memorials are suggested to the Cathedral of St. Joseph.

Those wishing to send condolences to the family may do so at the www.dulletrimble.com website.
To send flowers to the family in memory of Regina Delores McClurg, please visit our flower store.