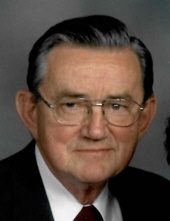 He was born July 20, 1927, on the family farm near Cooks Station, Missouri, the son of the late Charles Edward McCann and Mamie Friederica Kampman McCann.

Ray graduated from Steelville High School in 1945 and received a bachelor’s degree in Business Administration from Washington University in St. Louis in 1955.

He was a United States Navy veteran of World War II, released from active duty as a Petty Officer Third Class. He remained in the Naval Reserve and after college graduation was commissioned as an officer. He served in the Naval Intelligence Reserve program until he retired as a full Lieutenant in 1971.

Raymond was employed with the St. Louis office of the Missouri Division of Employment Security from 1961-1965. He then transferred to their Central Office in Jefferson City. He was promoted to Division Personnel Officer and served in that position until retiring in 1993, after 32 years with the agency. After his retirement, he worked part-time with Dulle-Trimble Funeral Home for several years.

He was a member of Immaculate Conception Catholic Church, Knights of Columbus, American Legion, Military Officer’s Association, past member of the Masonic Lodge (32nd Degree), and the International Personnel Management Association.

Mass of Christian Burial will be 11 a.m. Saturday at Immaculate Conception Catholic Church with the Rev. Msgr. Robert A. Kurwicki officiating. The general public is welcome to attend the services while following social distancing guidelines. Facial coverings are required while in attendance.

Graveside service with military honors will be 3 p.m. Saturday at the Owensville City Cemetery.

Memorials are suggested to Immaculate Conception Catholic Church or to a charity of the donor’s choice.

Those wishing to send condolences to the family may do so at the www.dulletrimble.com website.
To send flowers to the family in memory of Raymond William McCann, please visit our flower store.