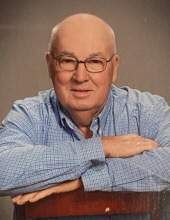 He was born on October 3, 1943, in Tuscumbia, to Alphonse John and Regina Catherina (Luebbert) Holtmeyer.

He was a 1962 graduate of St. Elizabeth High School.

Ray served his country in the United States Army Reserves for thirteen years and the National Guard for twelve years. During Desert Storm, Ray was deployed in 1990-1991 to the 1221st transportation unit. He was part of the 915 Line Haul Unit and moved supplies to the front lines.

He was married on October 3, 1964, at St. Joseph Catholic Church in Westphalia to Virginia Mary Feltrop, who resides at the home.

After high school graduation, he worked for twenty-two years at Capital Supply Company. He then worked for the Missouri State Highway Patrol Troop F for eighteen years as the supervisor of maintenance and drove the school bus part-time for Blair Oaks School District for over twenty-five years.

He was a member of St. Margaret of Antioch, parish council, and served as a Eucharistic Minister; St. Stanislaus Perpetual Adoration, since its beginning in 1986; Knights of Columbus, Wardsville/Osage Bend, Council #8399; the American Legion; and the St. Stanislaus School Board, in earlier years.

Ray was known for his witty sense of humor and his many “Rayisms.” He enjoyed hunting, fishing, camping with his family, and taking his grandchildren and great-grandchildren on Ranger and 4-wheeler rides. He especially enjoyed driving his Farmall B (1046) while working on his small farm. He also enjoyed driving the school bus for school routes and many sporting events and field trips. Over the twenty-five-year career, he had transported two family generations.

Burial with military honors will be in St. Margaret of Antioch Catholic Cemetery in Osage Bend.

Memorials are suggested to St. Jude Children’s Research Hospital or to the American Cancer Society.

To send flowers to the family in memory of Raymond Joseph "Ray" Holtmeyer, please visit our flower store.