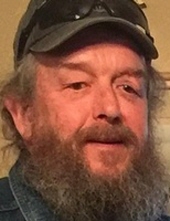 Randy was a mechanic, welder and sign maker. He worked for Chrysler Corporation, Great Central Lumber and at the time of his illness, he was a sign builder at Bee Seen Sign Company where he constructed the lighted cross which sits on top of St. Mary’s Hospital. He still tinkered with mechanics, a little wood working but his favorite past time was riding his Harley Davidson motorcycle and having cook outs with his friends.

He was preceded in death by his father Bill on August 26, 2007, a baby sister Donna Ilene, his grandparents Charles and Ethel Carney and W.R. and Katie Galliher.

The family will receive friends on Thursday evening August 10th from 4 to 5:30 p.m. with a services at 5:30 p.m. at Scrivner-Morrow Funeral Homes in Russellville with Rev. Alan R. Earls officiating.

Randy will be escorted by his motorcycle friends to Enloe Cemetery west of Russellville for burial following the service.

Memorials may be made to cancer Research or donors choice.

Scrivner-Morrow Funeral Home in Russellville is in charge of the arrangements.
To send flowers to the family in memory of Randall D. Carney, please visit our flower store.