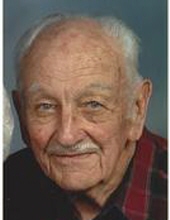 He was born March 1, 1921, in Russellville, Missouri, the son of the late George Edward and Lydia (Gemeinhardt) Scheperle.

He was united in marriage on January 26, 1942, in St. Charles, Missouri, to Dorothy Mae Marsch who survives.

Following World War II, Ralph traveled back to Russellville and opened the Millbrook Blacksmith with his brother, Elwin Scheperle. He eventually began working for DeLong’s, Inc. as a welder, foreman, and salesman. He retired after 40 years with DeLong’s, Inc.

He was a member of St. John’s Lutheran Church-Stringtown. He enjoyed traveling with Dorothy, mowing grass, and spending time with his family.

He was preceded in death by his parents; a step-grandson, Bradley Birdsong; one brother, Cleo Scheperle; a sister-in-law, Edna Scheperle; and a brother-in-law, Walter “Bud” Marsch.

Visitation will be 4-7 p.m. Tuesday, June 20, 2017, at Scrivner-Morrow Funeral Homes in Russellville.

Burial will be in St. John’s Lutheran Cemetery-Stringtown.

Memorials are suggested to the St. John’s Lutheran Cemetery-Stringtown; or to Hospice Compassus.

Scrivner-Morrow Funeral Homes in Russellville is in charge of the arrangements.
To send flowers to the family in memory of Ralph John Scheperle, please visit our flower store.