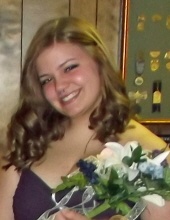 She was born February 1, 2000, in Jefferson City, the daughter of Robert Allen White and Amy Renee Long.

A 2018 graduate of Jefferson City High School, Piper was a talented artist, was a free-spirited brilliant girl, music enthusiast, and a lover of animals especially her dog Lilly.

A celebration of Piper’s life will be held at a later date. Service times will be announced in the News Tribune and on the funeral home’s website when scheduled.

Memorial donations are suggested to Piper’s family to help with funeral expenses.

Those wishing to send condolences to the family may do so at the www.dulletrimble.com website.
To send flowers to the family in memory of Piper Gypsy Rose White, please visit our flower store.