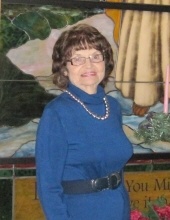 Phyllis N. Rusbult of Jefferson City, passed from this life to the next on Sunday afternoon, November 17, 2019. She lived a long, happy life for over 95 years, and died at Heisinger Bluffs with her family at her side.

Phyllis was born at home, on May 8, 1924, on the farm where she grew up, near Atkins, IA, to Louis and Velma Armstrong (deceased). She was baptized in a small country church, and her faith in Jesus Christ was an essential part of her entire life.

She attended a little country school where she and one other girl, were the only students in their particular grade through eighth grade. She attended Atkins high school, graduating when she was only 16 years old. When she finally became old enough, she enrolled in the Cedar Rapids Business College, where she graduated as an expert in short hand, typing, and bookkeeping.

In her very early 20’s, she married Ernest Buettner, (deceased), and gave birth to her first daughter, Nancy K. (Robert Keating, Jefferson City, MO). She went on to marry Rex W. Rusbult in 1950 for a happy 55 year marriage, which ended upon his death in 2005. Two more daughters were born to that union, Cynthia Jean (Joe Schmitz, Lakewood, Colorado), and Dr. Vicki Rusbult, (Bangor, ME).

Rex and Phyllis spent their first 15 years working on a farm in South English, IA, where they made many lifelong friends. In 1965, they sold their farm and move to Cedar Rapids, IA, where Rex worked at the U.S. Post Office. Phyllis worked at St. Luke’s Hospital as an Executive Secretary to the Vice President of Finance.

Upon Rex and Phyllis’ retirement, they moved to Bella Vista, AR, in 1986, where they spent 20 wonderful years enjoying each other and many friends and visitors. They loved to dance. During those years Phyllis learned to quilt and thoroughly enjoyed that creative outlet. Throughout her life she was superb at home interior design, often updating and redecorating their home, making it homey, colorful, and beautiful. She also dressed very smart and stylishly all her life.

After Rex’s death, Phyllis moved to Jefferson City, MO, where she spent the last 12 years of her life, living part of the time in her daughter’s home. She was a member of the Silver Sneakers class where she exercised regularly. As she became more elderly, she spent the last three years of her life at Heisinger Bluffs Lutheran Senior Service Center.

Phyllis was preceded in death by her parents, an infant sister, one brother, Derrol, one granddaughter, Angela, one great-granddaughter, Renee, and one grandson, William. In addition to being survived by all three daughters, she is also survived by five grandchildren; Jennifer Keating (Jefferson City), Nicholas Keating (Jefferson City), Pamala Keating Redferrin (Woody, Nashville, TN); Max Roberts (Nancy Stewart, Cincinnati, OH); and David Rusbult (Bangor, ME); and two great-grandchildren, Emily Roberts and Ellis Roberts. She is also survived by several nieces and nephews.

In addition, friends and family are invited to share in a memorial service to be held in the Heisinger Bluffs Chapel, 1002 W. Main St., Jefferson City, on December 7, 2019 at 2:00 p.m., officiated by Chaplin Jim Mueller. A reception will follow.

Her interment will be alongside her husband in the Fayetteville National Cemetery in Fayetteville, AR.

Memorials are suggested to Heisinger Bluffs.

END
To send flowers to the family in memory of Phyllis N. Rusbult, please visit our flower store.